Chief Justice of the People’s Court Nguyen Hoa Binh: The draft resolution of the online trial was carefully and carefully implemented

On the morning of October 24, continuing the second session, the National Assembly discussed online the work reports of the judicial authorities, Chief Justice of the People’s Court Nguyen Hoa Binh explained and clarified a number of deputies’ issues. Parliament stated. 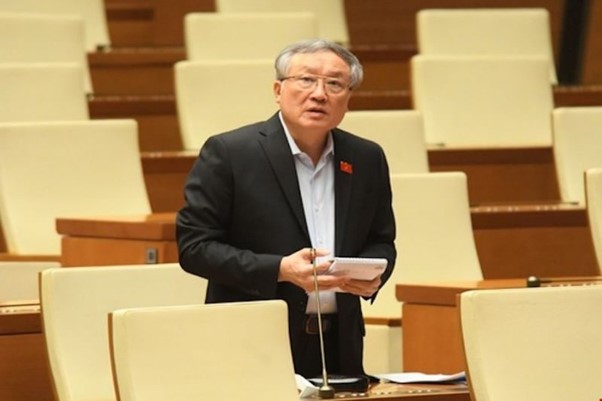 Chief Justice of the People’s Court Nguyen Hoa Binh said: The opinions of the National Assembly deputies at the online discussion session on the draft Resolution on organizing the online trial showed that the majority of delegates appreciated the efforts of the parties. the Public Security Agency, the Procuracy, the Court, the Judgment Execution Inspector in the performance of their duties, as well as concurring with the reports of the Chief Justice of the People’s Court, the Chief Procurator of the People’s Procuracy; crime prevention and combat and law violations; judgment enforcement; anti-corruption work in 2021.

Chief Justice Nguyen Hoa Binh affirmed that the reports had been carefully prepared and thoroughly examined at the agencies of the National Assembly from early on. The delegates also shared the difficulties faced by the procedural authorities when performing their duties during the Covid-19 pandemic. At the same time, support the National Assembly promulgating a draft Resolution allowing the Court to hold an “Online Trial” according to the Government’s Report and the Judiciary Committee’s Verification Report. Many of the comments were suggestive and set higher, more expansive and quality requirements for the online trial. The opinions of the delegates will be fully absorbed by the People’s Court.

Regarding the piloting of an online trial, Chief Justice of the People’s Court Nguyen Hoa Binh said that after a period of preparation and consultation with agencies, especially the verifying agency, the People’s Court of Vietnam found that the organization of the trial was conducted. Online trial is a big deal. The National Assembly deputies said that the online trial not only meets the immediate but also long-term requirements in adjudicating cases. If we put the Resolution into 3 years, it means that after that there must be another Resolution stating more clearly to maintain the online trial. Therefore, in the annual report of the People’s Court, there must be a report to the National Assembly on the achieved results, limitations and lessons learned as well as making recommendations for implementation. And if we set 3 years, it means that the method of organizing an online trial can only be implemented in 3 years, while the delegates all said that this form can meet the settlement of the trial. In the immediate and long-term urgent conditions, the Court still has to implement as well as to deploy more and more widely.

Explaining opinions that need to be cautious and strict when including in the draft Resolution the contents of the scope and conditions of application, Chief Justice Nguyen Hoa Binh said, in many international courts, it has been put into the lower system. legal layer for holding an online court hearing in various ways such as: promulgating a procedural act or promulgating a separate law on e-procedure; assigned to the Chief Justice of the People’s Court for guidance.

Referring to the experience of international courts, the People’s Court has included in the Draft Regulations and Choices of the Court, specifically issuing an inter-sectoral circular between the Ministry of Public Security, the People’s Procuracy, the People’s Court, and the Ministry of National Defense. to create a legal infrastructure for conducting online trials. Although the draft Circular on conducting the online trial has been drafted for the fourth time, it is still incomplete and the finalization of the Draft is still being carefully and carefully implemented.

Regarding resources to ensure the implementation of the online trial, Chief Justice Nguyen Hoa Binh said that the provinces of Bac Giang, Tuyen Quang, Hai Phong, Ho Chi Minh City and some other localities have supported the People’s Court to implement this form of judgment. The online trial will be implemented in localities that have been carefully prepared in terms of information technology infrastructure. However, in the long term, localities need to be allocated reasonable resources for implementation, so it should be included in the Resolution of the National Assembly.

Regarding the legal infrastructure, it is possible to issue a separate law and the development of this project has been completed by the People’s Court with the participation of the Ministry of Information and Communications, the Vietnam Bar Federation and other ministries and committees. branch. The TANDTC has also reported to the Government on the development of a scheme to allocate resources for implementation. The development of the project for the purpose of internal administration of the Court, applying information technology in personnel management, case file management, finance, court administration, training and personnel training… In addition, the construction of the project is also to provide people with judicial utilities and services such as public judgment, legal system, introduction of case precedents, legal interpretation, assistance. legal help. On the other hand, in order to carry out procedural activities on the basis of information technology and digital technology such as receiving lawsuit petitions, electronic adjudication, taking testimonies, conciliation, serving judicial decisions, etc. In addition, the construction of the project also aims to establish a dossier, including: building, managing and transferring digital records on the basis of information technology, digital technology…

The majority of delegates agreed with the need to issue a Resolution as in the Report as the Verification Report suggested, and found this to be a breakthrough solution to improve transparency in legal proceedings. of the court, creating leverage to promote the settlement of the case, the case is faster and more convenient, fully satisfying the citizen’s rights, saving people’s time and travel costs.

ARTISTS CALLING MONEY FOR Charity – WHAT WILL BE RESPONSIBLE IF USED FOR WRONG PURPOSE?

Recently, there have been many scandals and mixed opinions, good and bad, related to artists calling and raising money for charity. From a...

In order to meet the requirements of practice to remove difficulties and obstacles in corporate governance, production and business...

SUBMISSION FOR EMPLOYMENT BENEFITS IN THE TIME OF SOCIAL DISTANCE

Unemployment insurance is a regime aimed at compensating a part of an employee's income when he or she loses a job, supporting them in...

Disputes over house ownership by Vietnamese residing abroad in the name of the household and application of Case Law No. 02/2016/AL

Dr. NGUYEN THI MINH PHUONG (Ho Chi Minh City People's Court) – Within the scope of the article, the author focuses on clarifying the...

Chief Justice of the People’s Court Nguyen Hoa Binh: The draft resolution of the online trial was carefully and carefully implemented

ARTISTS CALLING MONEY FOR Charity – WHAT WILL BE RESPONSIBLE IF USED FOR WRONG PURPOSE?

SUBMISSION FOR EMPLOYMENT BENEFITS IN THE TIME OF SOCIAL DISTANCE